Jesus replied: "A certain man was preparing a great banquet and invited many guests...but they all alike began to make excuses...The servant came back and reported this to his master. Then the owner of the house... ordered his servant, 'Go out quickly into the streets and alleys of the town and bring in the poor, the crippled, the blind and the lame.'" (Luke 14:16, 18, 21 NIV) 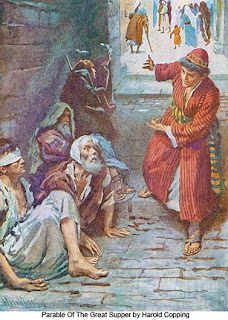 As we were setting out on this journey and we shared the vision God had given us we were encouraged by those who were excited by what we said.  However, it became clear that people were excited for us but didn't want to join us.

Don't get me wrong - they sought God about it and felt it was a clear "no" - it's just that it wasn't how I imagined it would be.  And there is the issue - God starts us on a journey, we know where we're are heading but we have all these preconceived ideas of the route we'll be travelling on.

God in His humour uses these as teaching moments - as I'm expressing these thoughts to Him it's almost like He says "do you want to know my plans for you?" and that's when this story came to mind.

If we were able to choose the people who would be part of the Body of Christ, who would we choose?  Well if you're anything like me then you'd probably go for the talented, the committed, the passionate... you know the "best".

But who does Jesus choose?

And that's when things changed: we want now actively want those who just don't fit in the "church" mould, the broken, the rejects, the outcasts, the lonely and the unlovely because those are the ones that Jesus sought out and we are to do the same.

His body was broken for us and made whole - which is also symbolic of a broken people being the Body of Christ and being made whole.

Jennie had a traumatic dream a little while ago where she was trying to rescue babies that were drowning in a pond.  When I was praying for her the following morning I said "this actually feels like God was trying to show you something here".  His precious ones, His babies whom He loves are drowning and He is calling us to get in the water and save them (and yes, that does mean that we'll get wet in the process).

John Spencer
John is a child of God, a husband and a father of six children (four on earth and two in heaven). He trained as a teacher at Oxford University, but despite this he still refers to himself in the third person. He lives with his family near Oxford, England where he wonders how his wife still finds the same jokes funny after nearly 20 years of marriage.