Echoes of the Abrahamic journey

On 16 June 2013 we were officially "prayed out" of our old church to begin our new journey*. When I was struggling for the words to say my mentor, Roy, likened our journey to that of Abraham:


The LORD had said to Abram, "Go from your country, your people and your father's household to the land I will show you. I will make you into a great nation, and I will bless you; I will make your name great, and you will be a blessing." - (Gen 12:1-2 NIV)

We have been privileged to have been given a vision by God of what he is going to do in our little town of Witney (and as it turns out in the wider UK) and part of that obedience is to leave and start a new community of believers  so we can bless others.

Stephen revealed more details about Abram's call when delivering his sermon to the high priest:


The God of glory appeared to our father Abraham while he was still in Mesopotamia, before he lived in Harran. 'Leave your country and your people,' God said, 'and go to the land I will show you.' - (Act 7:2-3 NIV)

Relating this back to Genesis we see that this occurred before the following:


Terah took his son Abram, his grandson Lot son of Haran, and his daughter-in-law Sarai, the wife of his son Abram, and together they set out from Ur of the Chaldeans to go to Canaan. But when they came to Harran, they settled there. - (Gen 11:31 NIV) 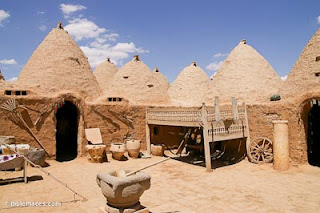 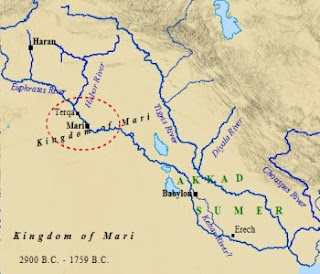 They began the journey but then they stopped.  Haran was on a fertile plain which was watered by the Balikh River, a major tributary of the Euphrates River and on the main trade caravan route.  It appears that Abram became very prosperous there (Gen 12:5).  It also seemed to be a centre for the worship of the moon god Sin.

This is our story - we saw amazing things when my eldest daughter and I went to India and when my wife, Jennie, went to Bethel School of Supernatural Worship.  But after seeing something of the glory of God we had become settled again into comfortable living.  To quote my daughter "It's easier to just forget all about India".  Were we worshipping the gods that everyone else worships: comfort and prosperity?  It took the chopping off of my thumb with a circular saw for God to wake us up from our slumber and thrust us forward into His purposes.

"By faith Abraham, when called to go to a place he would later receive as his inheritance, obeyed and went, even though he did not know where he was going." - (Heb 11:8 NIV)


We have seen something and we started to move towards it but we don't fully understand how we'll get there and what it will look like we just are moving forward.

"Abram traveled through the land as far as the site of the great tree of Moreh at Shechem. At that time the Canaanites were in the land. The LORD appeared to Abram and said, "To your offspring I will give this land." So he built an altar there to the LORD, who had appeared to him." - (Gen 12:6-7 NIV)

It was only when Abram stepped out and travelled to Canaan that God told him that He was going to give this land to his offspring.

It was only when we reluctantly stepped out and said we'll start a new church that Clare Cadbury said to Jennie (without knowing that we had done this) that God told them that there was going to be a new church and that they were going to join it.

And so we have begun.  We're excited, we're nervous and we're certainly in a battle as we seek to take ground from Satan, but we have begun.  And we know that God will reveal His purposes as we are obedient to Him....

*It was an emotional time saying goodbye and thanking the church for the opportunities they gave us to serve them through worship, children's work, preaching and the prophetic.  It was also a chance to thank them for the love and support given through the death of two of our babies, the birth of our sixth child, my wife's continued bouts of optic neuritis and other serious illnesses and for them loving me despite my Asperger's.  When we joined the Oxfordshire Community Churches, we were broken people - out marriage was in tatters, we were both struggling with so many issues and Jennie had completely turned her back on God - so it was fantastic the Geoff and Mary Norridge were there who were instrumental in putting our marriage back together through the Marriage Course and putting our lives back together through Celebrate Recovery.
Posted by John Spencer

John Spencer
John is a child of God, a husband and a father of six children (four on earth and two in heaven). He trained as a teacher at Oxford University, but despite this he still refers to himself in the third person. He lives with his family near Oxford, England where he wonders how his wife still finds the same jokes funny after nearly 20 years of marriage.